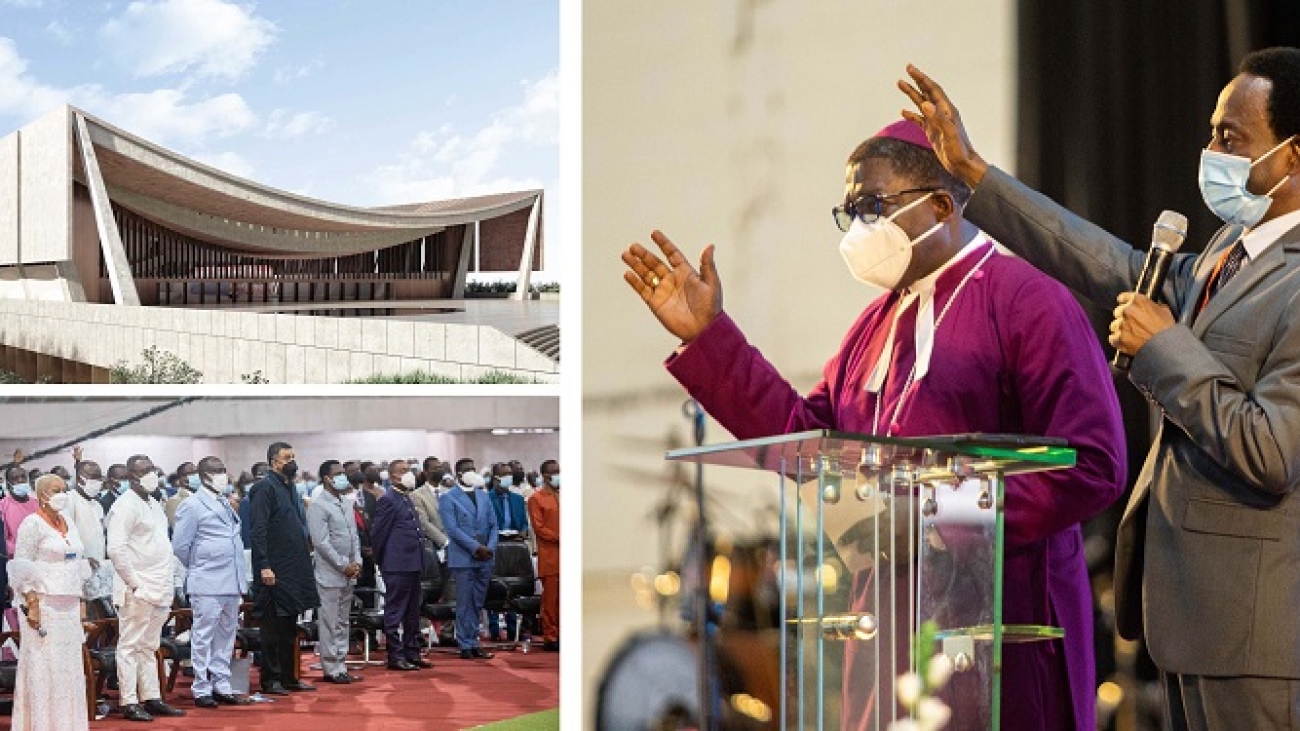 The Chairman of the Board of Trustees for the National Cathedral project, Apostle Professor Opoku Onyinah has called on Christians in the country, Ghanaians in the diaspora and corporate bodies to contribute their quota to the building of the national iconic edifice.

The most touted National Cathedral project, which is to be built by the Christian community in Ghana, is expected to cost $250 Million UDS.

Speaking at the National Cathedral Fundraising Strategies launch at the Oil Dome of the Royal House Chapel International in Accra on Sunday, September 5, 2021, Apostle Opoku Onyinah, who is also the immediate past Chairman of  The Church of Pentecost and President of the Ghana Pentecostal and Charismatic Council (GPCC), said the project, which is owned by churches in Ghana, is expected to be completed in March 2024.

“It is hoped that with oneness of heart, we can achieve this to the glory of the Almighty God. Let us therefore arise and build,” he said.

Reading from Nehemiah 7:70-72, the Chairman of the Board of Trustees stated that as Christians who believe in the sovereignty of God, they must see the National Cathedral project as one of the gifts of God to Ghanaians.

According to him, the inclusion of the Bible Museum and the Biblical Garden will give the cathedral and enhanced outlook.

“The Bible Museum and the Biblical Garden will make the cathedral to become an educational and research resource centre, as well as another centre of attraction in the country,” he said, adding, “It has the potential of drawing the world to Ghana.”

With regards to the funding of the project, Apostle Prof. Opoku Onyinah said that the government provided the land and seed money of 10 per cent of the total sum. Fortunately, he said, when the head of churches and their general secretaries met in August 2021, it was their cherished desire that the church in Ghana must own the project.

“Ownership brings responsibility. Therefore, the implication is that, we must develop strategies to raise funds to build the cathedral,” he said.

“To this end, it has been proposed that if the churches are able to mobilise at least one million Christians in the country who will faithfully commit themselves to contribute a minimum of GHS 100.00 every month for the next three years starting from September 2021, the necessary funds will be generated for the project. This is based on the premise that Christians constitute 71.2 per cent of Ghana’s population which translates into about 21.6million people.”

Apostle Prof. Onyinah continued: “Like in the days of Nehemiah, as the family heads and the people contributed to the building and restoration of the walls of Jerusalem, so also should all of us contribute to the building of this cathedral.”

He said the Board of Trustees had worked out some strategies to achieve the aforementioned goals by selecting 50 key church denominations to provide some expected number of people to contribute a minimum of GHS 100.00 a month for one year, starting from September 2021. This, according to him, could generate GHS100million ($16.67million) every month or GHS 1.2 billion, which is about $200million a year.

He added: “Other churches have been identified to give a certain number of people to contribute.

He encouraged all Ghanaians to contribute GHS 100.00 a month for the next three years. He disclosed that all churches in Ghana will be expected to set one week in a year dubbed: ‘National Cathedral Week’ for prayers and to raise funds to support the project. He further directed all churches in the country to launch the fundraising at their levels on September 19, 2021, to engender enthusiasm and participation of their members. Fundraising services will be launched in all regional capitals across the country in the coming days, he added.

According to Apostle Prof. Onyinah, contributors to the fund can pay to the MoMo short code *979# or various bank accounts provided by the Secretariat. Individuals and families, as well as corporate bodies, who contribute will have their names electronically generated and some embossed on the walls of the Cathedral, he disclosed.

In his welcome address, the Apostle General of the Royal House Chapel International, Rev. Sam Korankye Ankrah, called on the Christian community to own the project. He indicated that President Akufo-Addo does not own the National Cathedral, and that he [the President] is just the vision bearer.

“The National Cathedral project is not owned by the President, Nana Addo Dankwa Akufo-Addo. The Bible teaches us the model of how temples are built. For instance, when you read 2 Chronicles chapter 2 you realise that to build the temple, God places the vision in the heart of King David, and in our case the President. King David shared the vision of building God’s temple with his son Solomon. Solomon in our case would be the Board of Trustees whom the President shared his vision with to make sure that the the dream God placed in his heart is materialized and done according to plan,” he stated.

On his part, the Executive Secretary to the Cathedral Secretariat, Dr. Paul Opoku-Mensah, said the construction of the Cathedral was first announced by the President, Nana Akufo-Addo, in his presidential address on March 6, 2017 where he informed Ghanaians about his intention to build the National Cathedral which would address a critical missing link in our national architecture where the State will have the opportunity to have formal religious activities including state burials, presidential inaugural services, among others.

Some of the features of the cathedral are a 5000 auditorium but expandable to 20,000 during national events, chapels which can be rented to churches, prayer rooms, crept where leaders of society and national figures can be buried, among others. 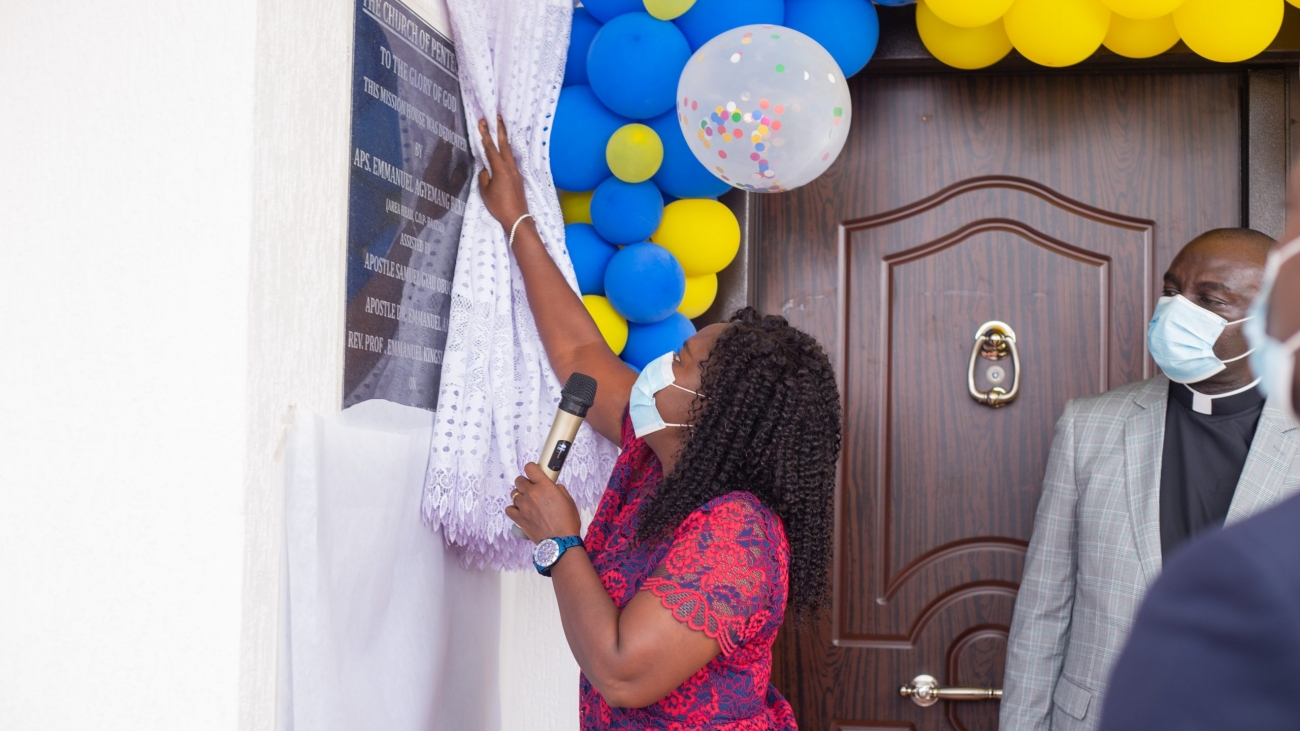 Dedication of the one-storey building which was officiated by the Haatso Area Head, Apostle Emmanuel Agyemang Bekoe has a master bedroom ensuite, four other guest rooms (all ensuite), a furnished kitchen, a study room and a garage.

The District Estate Committee Chairman, Elder Augustine Sarpong, indicated that the building was 95% complete with outstanding works being largely external and landscaping works.

Elder Sarpong explained that “the building is a green building” because of its facilities. The building was going to be powered by solar energy. The lighting and water systems are going to rely mainly on power from the sun to function, he added.

Meanwhile, the Resident Minister of PIWC- Atomic, Apostle Samuel Oboubi Gyau and family is expected to move into the building within two weeks when the district’s rental tenancy runs out.

The PIWC-Atomic mission house project dates back to the creation of the district in October 2008. The new district initially inherited the rented mission house of the erstwhile PIWC-Accra located in Dansoman SSNIT flats area. It became apparent that the distance did not enhance the effectiveness of the resident minister.

Therefore an alternative residential accommodation led to the rental of house number 9 along the Atomic Down-Musuko road in Kwabenya in June 2009.

In order to ensure a permanent residential address, a suitable available land within reach of the church auditorium complex was purchased by efforts of some presbyters such as the Late Eld.Arc. Kofi Amponsah, Eld. Matthew Nkansah, Eld. Dr. Francis Afflu, Dcn. Kofi Owusu-Sekyere and the Late Arc. J.G.K. Abankwa.

After a number botched attempts the district eventually secured a plot of land in 2014. The construction of the five-bedroom Mission House begun in February 2018 following the sod-cutting ceremony on 23rd March, 2018 by the then acting Resident Minister, Aps. Dr. Emmanuel Kwesi Anim, on behalf of the Area Head.

Works then proceeded diligently till May 2021 when it got sufficiently completed for dedication.

In his brief remarks, the Resident Minister was full of appreciation to one member who paid for the construction of the entire roof structure and covering, a second member who took up the payment for the kitchen cabinets and all the wardrobes as well as all members of the church for their immense support for the project.