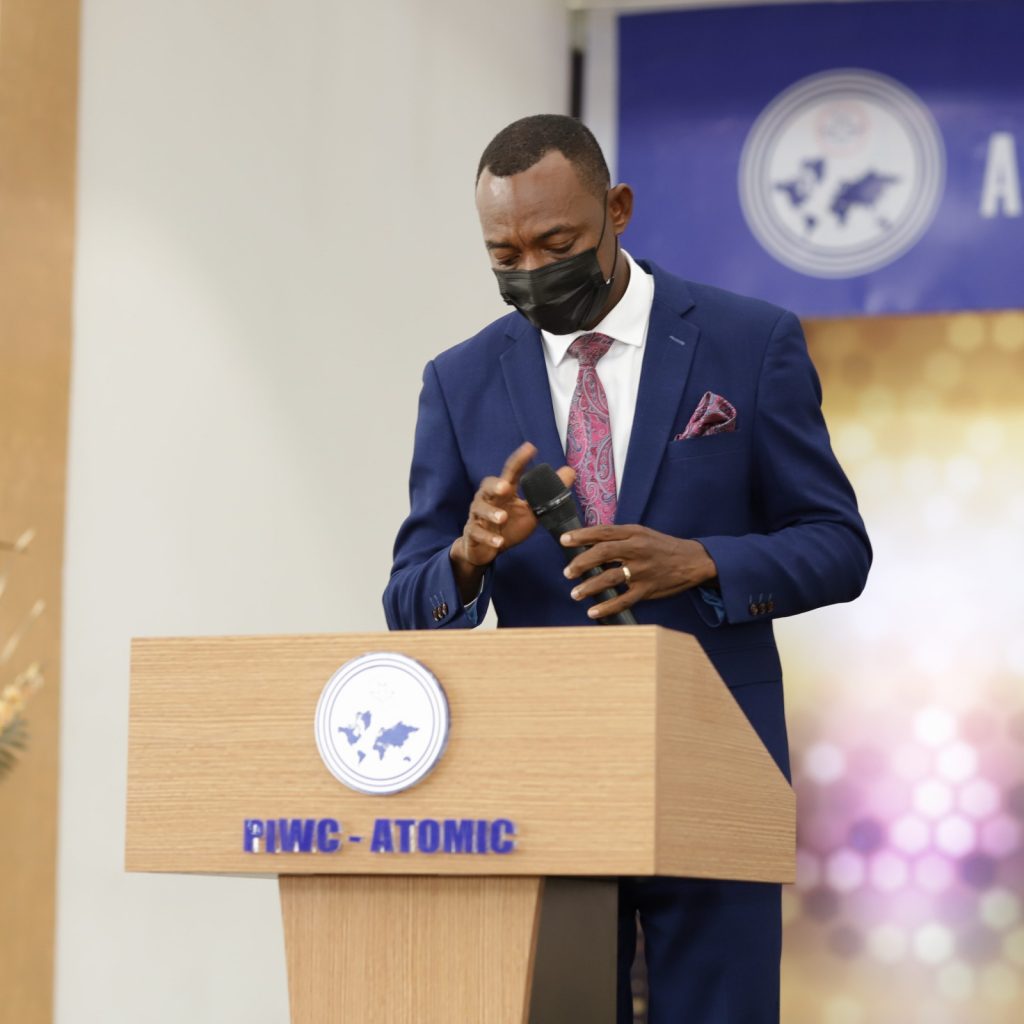 Chosen to possess the nations

We want to bless the Lord for this grace and mercies, for his protection for the leaders of the church and for everybody in this house. This is PIWC, Atomic, the city on a hill.

We bless the Lord for what he did through Apostle Samuel Gyau Obuobi and his family. We thank God for the awesomeness of his grace and the miracle that happened here during his tenure. We thank the Lord for the leaders as well and all the members of this church. We believe that the Lord who has set us as a city on a hill shall do amazing things.

I believe from the scriptures that when someone comes to Jesus, he is immediately called by God and brought into his kingdom to possess the nations. That tis the mandate of the New Testament church. You need to understand the dynamics of this kingdom.

God was moving in a new way. A new order—God’s order—was ushered in. God was reversing all things that had been brought by the fall of man and beginning the process of recreating all things anew.

So, in all of Jesus’ ministry, the words he spoke, the miracles he performed and everything he did showed there was a new order. God had come in the flesh and a new dimension had been initiated. When the believer is chosen by God, there is no weapon formed against him that shall prosper. That is when Peter comes in. Peter was called a rock before he became a rock because when God chooses you he calls you with his eyes on your future. He does not make reference to your past but his eyes are on your future realties. There is nothing the enemy will do that will cause God to “unchoose” you.

In Deuteronomy, our mandate is to possess the nations. It is not that God is bringing us in to leave us the way we are. He has not brought us to live our lives anyhow or to live the old life but he wants his word to transform us so he can use us as he likes.

1 Corinthians 1:27 says God has chosen the foolish things of the word to shame the wise and the weak things to shame the strong. He called the weak to make them strong; the poor to make them rich; those who have been disappointed all their life to the appointed all their lives. That is why when I look through the scriptures I am happy that I have been chosen by God. It is because I know the blessing I have received no longer belongs to me. He blesses me for himself. Whatever he gives me does not belong to me.

This is why Ephesians 1:4 says he chose us in him before the foundation of the world. There, God was acting in his own interest. Our selection is an act of God’s sovereign grace. Out of all the multitudes of mankind, he called me and brought me in for himself.

So, in inaugurating the kingdom, Jesus began to give birth to a new breed of individuals after his own order. So, he went about preaching and at a point (in John 3:5-8) he had an encounter with Nicodemus who wondered how he could be born again. Jesus told him nobody to could enter the kingdom unless he was baptized in the water and the spirit.

When Jesus was hanging on the cross the enemy thought it was all over but little did he know that in the dying of Christ was the birth of the church. When the pericardial sack that held Jesus’ heart broke, the church was born. There was total silence when that happened but God knew what he was doing. So, Jesus said unless you are born of water and the Spirit, you cannot enter the kingdom of God. Flesh gives birth to flesh and spirit to spirit. The wind blows where it pleases and you hear the sound but cannot tell where is to coming from or where it is going and so is everyone who is born of the Spirit. That means you cannot predict my future because I am a wind—you can hear my sound but can’t determine where I am going. May you become one of those whose lives cannot be determined because you are moved by the Spirit.

When Jesus was going he handed over these kingdom dynamics to the church. The church has been mandated by Christ to continue the kingdom. This brings us to the church age in which we are now. This is the grace dispensation. The battle between good and evil has been completed. God is the winner. Good is the winner. That is why the enemy tries to battle our minds and our psyches. The enemy can only influence me through my situation but he cannot do anything through my spirit unless I allow him so the mind becomes a gateway. We must control our minds. If you allow the enemy to control your mind, he will always harass you but if you allow God to control your mind by is spirit, you will not be influenced by your sensuality and situations. God controls every circumstance we go through by his spirit and it is through the spirit and faith that you can connect to God.

Satan operates through my sensuality and situations. It is when my mind tells me I cannot make it that Satan operates. The strength of the enemy is in my situation, my senses, and my circumstances because my spirit has been possessed by God. But if I am a kingdom son, no matter what the enemy does, God is going to defy my situation.

This scripture is striking because John the revelator is telling us what he saw. He says it was the Lord’s day—the seventh day, like Sunday or the first day of the week. He heard a voice telling him to write what he saw on a scroll and send it to the seven churches. John belongs do the descendants of Christ born anew. In his quest to possess the nations, he had been harassed and fried in oil. It is likely his vision had been impaired. What Domitian did was to send him to the Island of Patmos. But in the spirit he could see—someone who had been fried in boiling oil, when he was in the spirit on the Lord’s day, could see clearly. The church age is an era where everybody must see clearly. When the enemy thinks he has won, the Lord is going is going to cause you to be in the spirit. The reason John could not die is that the book of Revelation had not yet been written. It was a book to inspire the believer to look forward to the second coming of Christ. It was to illuminate the book of Daniel but the author had been fried. So, I say the book of Revelation was written by a fired and blind apostle.

He saw seven golden lampstands, representing the church. The son of man was standing in the midst of the church. That means the son of man is always with his church. As the Lord of the church he is always arranging the church. The church cannot be left and it cannot be stopped. He has chosen and equipped us to go out and possess the nations. The mandate is achievable. Wherever you find yourself, try to live the rhythms of the kingdom. We are in the season of acceleration. God is propelling the church into higher heights. It has nothing to do with who we are but has everything to do with where we are. May God cause you to see what is about to happen in this great church.

There is a great light here so when I come here, I dim my light and connect to his light so that I leave here with the light I have received from him. So, when I go to the marketplace, I go with the light I have received; I go and exude Christ. There is only one truth and one light. Once I am connected to his light, I can exude it when I go out there. May God cause you to be connected to his Spirit. He has brought us to a place of anointing without measure, grace without measure, oil without measure—a place of new beginnings; a place where the church never lacks. When you come to him, he gives you a new life and no matter what the enemy does, you will not die before your time. If they were able to fry John in oil and he refused to die, may you refuse to die. 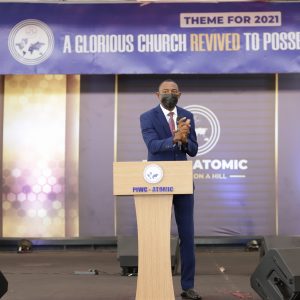 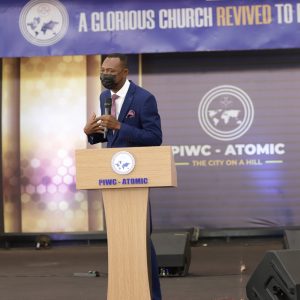 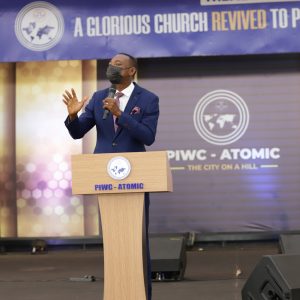 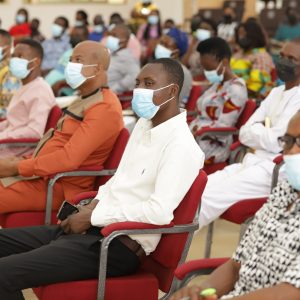 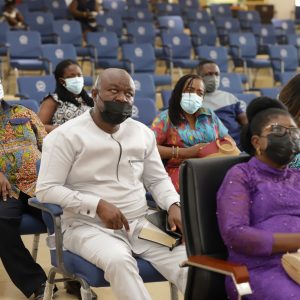 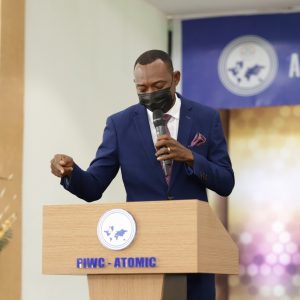 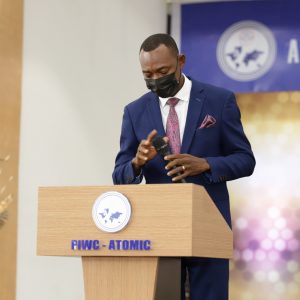 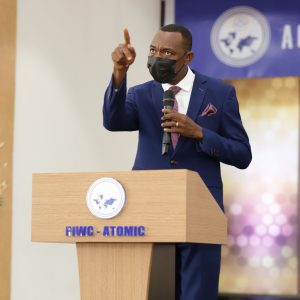 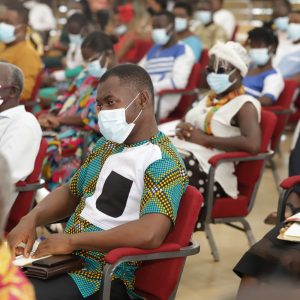 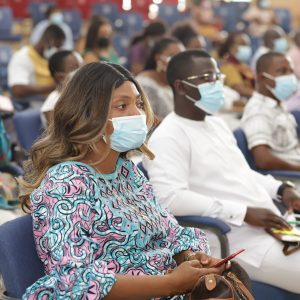